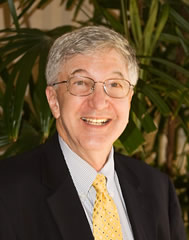 Rabbi Jay Miller has been a pioneer in advancing comprehensive multi-faith clergy relationships and civic engagement for over 30 years. He is a community leader among clergy of all faiths and in developing civic sector partnerships with the religion sector’s primary resource of clergy and congregations.

In 2002, Rabbi Miller was recruited by the Peninsula Community Foundation (now the Silicon Valley Community Foundation) to direct an historic effort to design an infrastructure with the capacity for Regional Clergy Engagement (RCE).  The success of that design provided the infrastructure which was able to enable all clergy in a region in mutual relationship and in partnership with the full spectrum of civic sectors’ professional and elected leaders.  This resulted in the formation of the components and methodology to secure community access to the totality of Congregation Based Resources (CBR) and Congregation Based Constituent Engagement (CBCE). This methodology for networking with all clergy framed an unprecedented transformation in society.  From 2002 to 2012, Rabbi Miller working on the Peninsula and in pilot projects in communities across the nation.

Rabbi Miller now leads Religion Sector 3.0, supporting the advance of all aspects of the religion sector, the relationship between religion sector institutions and those of the other four sectors, and the nature of religion in 21st century society.

In 2010, Rabbi Miller co-authored “A Local Official’s Guide to Working with Clergy and Congregations” with the publisher, the Institute for Local Government (ILG), the research institute of the California State Association of Counties and the League of California Cities. The Guide is a transforming document that defines the core components for framing partnerships between civic leaders and clergy, providing the first comprehensive gateway to the whole of the community’s congregations.

Established trainer, augmenting multi-cultural training, (a) providing an understanding of the religion dynamics and practices related to serving clients, engaging community and staff development, and (b) addressing perceptions and mis-perceptions of religious beliefs and practices, which effect individual advancement, civic involvement and a sense of a civil society.

Consultation for community leaders and institutions enhancing the capacity to:

RELIGION SECTOR 3.0
1.0 On the Town Square
2.0 Walls of Separation
3.0 Alignment:
Among Congregations -
Within Society